The Famous Pottery Squares of Bhaktapur

Nanicha! Come and give it a try! exclaimed 73-year-old Ganesh Bhakta Prajapati to me from inside his dark pottery workshop in the famous pottery square of Bhaktapur. The muddy shoes when you return from the pottery square of Bhaktapur walk back with you to your home with stories of generations in pottery, or with an inspiration to write, in my case. On walking down the damp alley towards the pottery square, I was gliding into a different world of people so engaged, happy, and unbothered about what’s happening outside the square. The pottery square is a world in itself. The age old pottery craft has survived temptations of Westernization, and is an asset to Bhaktapur. It is so inspiring to see them work hard to preserve their tradition and smile for every photo taken of them; probably one in every 10 minutes for the touristy area they work in!

Bhaktapur has two famous pottery squares; one located at the south west of Taumadhi Tole, where the damp alleys are lined with treadle-power wheels and rows of clay works drying in the sun. The next is the potter’s square located at Suryamadhi, south of Dattatraya Square, which is said to be the oldest, and more of the commercial, pottery square. A better choice is to visit Taumadhi Pottery Square, which is just south of Bhaktapur Durbar Square, along some very nice shops with pottery items on sale. The Taumadhi Pottery Square entrance welcomes you with heavy old wooden wheels, most parts of which have been replaced by weighted tires that spin faster, and pavements filled with new freshly-made clay vessels to dry up in the sun.

Bhaktapur’s pottery squares treat your eyes if you are lucky enough to be there on a bright sunny afternoon, when all the clay pots are kept in the squares for a roast in the sun. Clay piggy banks are the most produced product here. Also, the world famous Juju dhau, curd made only in Bhaktapur, is served in mud bowls made in the pottery squares. There are hardly any clay items that you cannot find in Bhaktapur’s pottery squares. Ceramics made in Bhaktapur are considered superior to those made elsewhere, primarily because they mostly use black clay, called “Dyo Cha”, literally meaning “clay of God” and is found only in one place. It is said to be supple in nature, and the most appropriate quality of mud for pottery. Only the Prajapatis of Bhaktapur are allowed to dig for it, and only once a year. It is hard and risky work, even life-threatening, as people have to dig down to more than 10-12 feet. The whole process of pottery making is not as easy as it seems, especially in Nepal, where every work has its base in culture and is guided wholly by tradition and norms that are to be followed mandatorily. It’s fascinating to witness so many generations of a family at work together. Pottery is a process. Everyone has a role and a part to play in creating a pot. The old men, the experienced experts, craft the mud into spectacular vessels in minutes, and old women are in charge of looking after the pots kept for drying and coloring. The young men are often engaged in carrying heavy heaps of mud from one corner of the square to the other, with young women beating and processing clay.

On visiting the pottery square, I happened to notice a boy around 12 years old in his school uniform helping his mother transport a basket full of newly-made piggy banks from his home to the not so far oven. He was watchful enough not to drop the pots, and was also perceptive to layer a T-shirt above his school uniform for fear of staining it with mud. In the maze of to-dry clay pots at the wide courtyard of the square, young and old men and women all glide towards the oven from their homes with baskets full of clay vessels. Only they know how to make a ramp out of the maze. Women work equally hard, and it seems there is nothing they cannot do in the pottery square. They were sure enough not to leave any cracks in the mud dough they were preparing for pottery, but were negligent about the cracks on their palms and feet.

Pottery is not everyone’s cup of tea; I crafted a cracked heap of clay when I was offered a try by Mr. Ganesh Bhakta Prajapati in the square. Experience can be substituted by nothing in the pottery square. It looks so easy when the potters dance their skilled palms on the cones of wet black mud and transfigure them into smooth vessels. Sometimes, it feels like they have magical hands that could create anything out of clay. The craftsmen have passed this technique down from generation to generation, and even today, the majority use traditional techniques.

There have been changes in machines and tools used by the potters in recent times, although most potters still use primitive tools. Be it modern tools or primitive, the potters have make sure the authenticity of the mud vessels they have been producing since time immemorial does not change. The younger generation is also quite supportive and inclined to the pottery business, but their parents are mindful that their children are not deprived of education like they were. Pottery has a doubtful future in Nepal due to the decreasing market value and the least volume of support the industry has been getting from the government, which makes parents doubtful of engaging their children in the business they have been doing for generations. 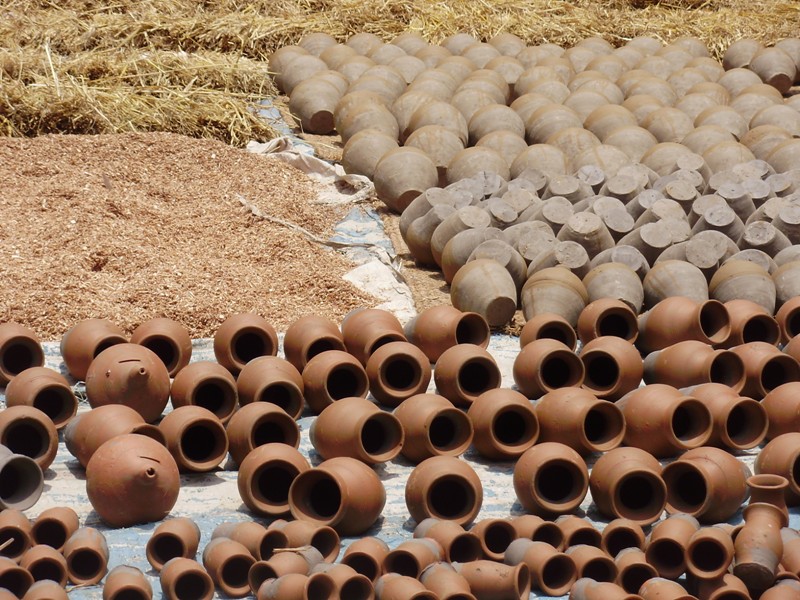 The devastating earthquake of 2015 demolished the whole country, including Bhaktapur, but renovation works are being carried out at a good pace. The pottery square seems to have risen stronger than before, and is operating better than ever. Still, efforts from government and local level would be of need for the revival of the famous pottery squares of Bhaktapur.